Windows and Office 365, the foundations of NWOW

Working from home or a satellite office

Windows and Office 365, the foundations of NWOW

Thanks to the partnership with Microsoft and the rollout of Windows 10 and Office 365, the police has built up an extensive digital network. Office 365 applications provide police staff with a flexible digital work environment. Improving the protection of systems was a major concern in this transition.

The Federal and Local Police have a total of 52 642 Microsoft Office 365 licences, making the Integrated Police the largest Microsoft customer in Belgium.

During the year, the Directorate of Police Information and ICT Resources (DRI) continued the first phase of the migration to Windows 10, i.e. the implementation of the necessary infrastructure within the police units to enable the transition to Windows 10.

At the same time, a considerable effort was invested in training and knowledge transfer to the "system managers" and "technical managers" through the provision of online documentation and the organisation of several information sessions so that they would have all the necessary knowledge to carry out the second phase of the operation, i.e. the migration of individual PCs to Windows 10.

The second phase of migration continued in early 2020.

The protection of the digital work environment is an ongoing concern. In 2019, the introduction of multi-factor authentication (MFA), among other things, strengthened this protection. This is all the more important in the context of mobile work. The use of MFA has evolved enormously. In 2019, MFA was activated in the Microsoft environment of 34 995 people.


Online collaboration and sharing with Teams and Yammer

With Microsoft Teams, it is possible to create, share and work together as a team. This application is available on PC, tablet and smartphone.

Teams is therefore clearly on the rise, as are most of the tools in the Office 365 suite.

Yammer is a social media that last year enabled an average of 12 535 police officers to exchange messages and experiences every day in a quick and informal way. This represents 34.56 % of the 36 267 Yammer users within the Integrated Police.

The following figures say a lot about the activity in this forum: in one year, 102 500 messages were "liked", 102 026 messages were posted and 13 500 000 messages were read. However, we see a stagnation in the use of this corporate social network.

2019 was the year WiKiPol was launched. This site aims to make a wide range of knowledge available to the staff of the Integrated Police in a clear and user-friendly way. WiKiPol forms a triptych with PolNews (the internal information channel) and PolDoc (which compiles internal and public reference documents).

This knowledge platform is organised thematically. The themes that were developed and offered to the entire Integrated Police in 2019 are the following: legislation (including Infolegis with an overview of new legislation), statutory texts, police procedures, well-being at work, human resources and the provision of support. WiKiPol is continuously updated and expanded. In addition, parts of WiKiPol can be modulated to fit a district or police zone.

This initiative aims to ensure that staff members, both in the office and in the field, have access at all times to correct and up-to-date information to carry out their daily work. 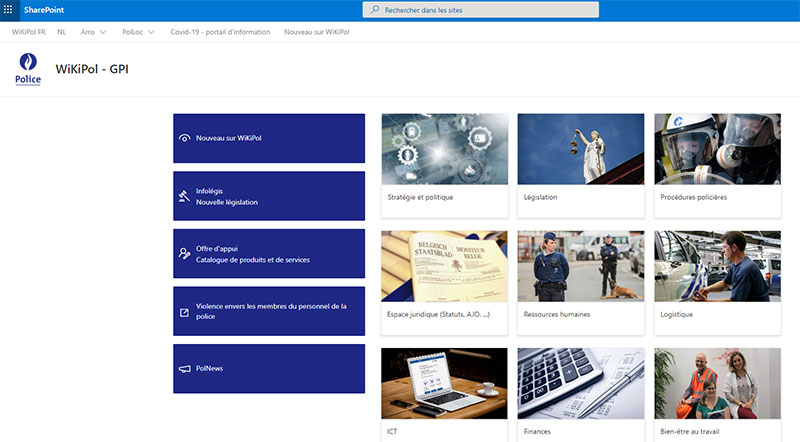 The Directorate of Police Information and ICT Resources (DRI) organised 15 road shows between April and September 2019, including one per district and various road shows for the centralised directorates. These road shows are a means of promoting and explaining the various applications available in the Office 365 suite (Teams, Yammer, SharePoint, Stream, etc.).

Each road show took place in two parts: a strategic part for Heads of Local Police Corps, directors and managers, and a more pragmatic part for ambassadors of the New Way of Working Digital, data officers and technical managers.

The network of NWOW.Digital ambassadors was also created at the beginning of 2018 within the Integrated Police. The ambassadors have diverse professional backgrounds and are people who are interested in these new technologies, use them and encourage their use within their departments. 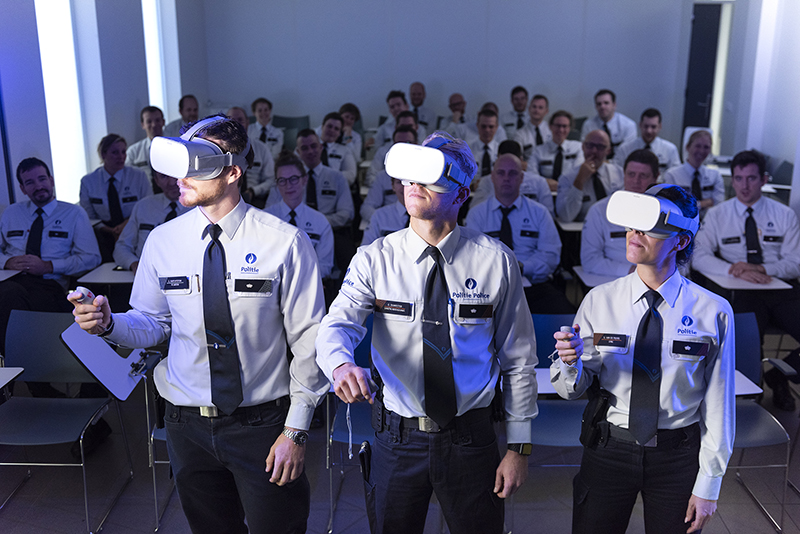 Working from home or a satellite office

The Federal Police intends to be a more flexible employer towards its staff. The latter have the possibility to work occasionally at home or in a satellite office. Enabling staff to carry out office tasks at home, closer to home or in the context of a specific mission at a different location, guarantees them more flexible working conditions and they appreciate this opportunity. On home working days, they do not have to spend time on commuting, which can be very long.

Those who do not wish/cannot work from home have the option of using satellite offices. On the whole Belgian territory, police staff have 25 satellite offices within the infrastructure of the Federal Police or the Local Police.