Migration and human smuggling/trafficking of goods 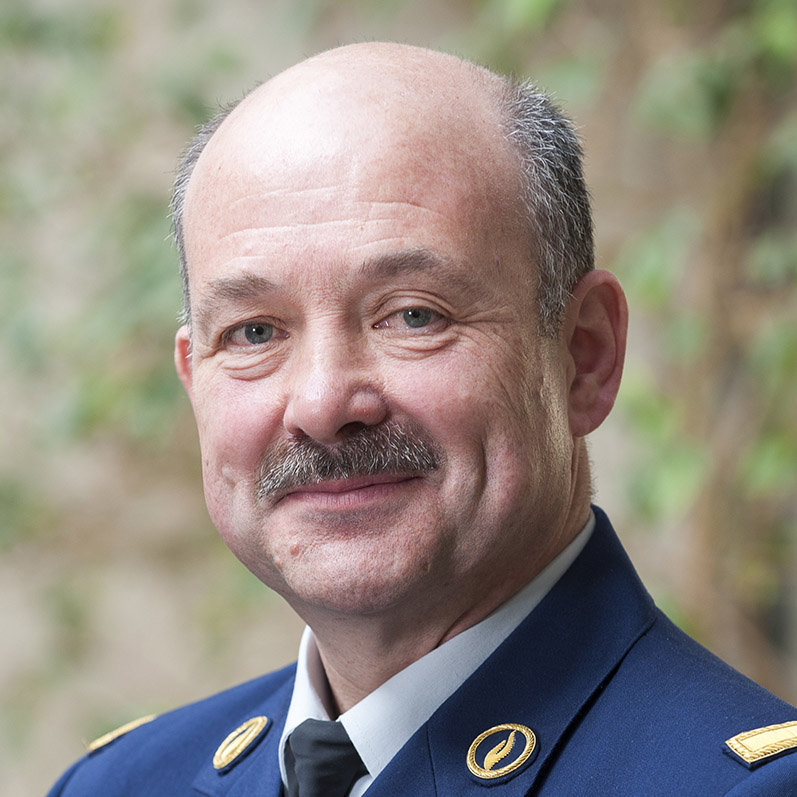 The security challenge related to migration flows strongly marked the activity of our front-line directorates.”

In 2019, the Directorate General of Administrative Police (DGA) saw an increase in activity in almost all its spheres of competence. Examples include an increase in public security missions, the number of border controls to be carried out and the road safety activities. This year also saw the successful integration of members of the Security Corps of the Federal Public Service Justice into the Directorate of Infrastructure Security (DAB).

The security challenge related to migration flows also strongly marked the activity of our front-line directorates. Finally, the speeding up of the introduction of new technologies in our processes can also be seen as a factor in the success of our work."

The police services regularly intercept persons staying illegally in Belgium. These are people who are suspected during a check of not meeting the conditions to stay or travel legally in Belgium. On the basis of different criteria, the Aliens Office determines whether an illegal resident is also a transit migrant. They are mainly individuals who try to travel illegally to the United Kingdom.
Since 2016, a specific service of the Directorate of Administrative Police Operations (DAO/Migration) has followed up this phenomenon. 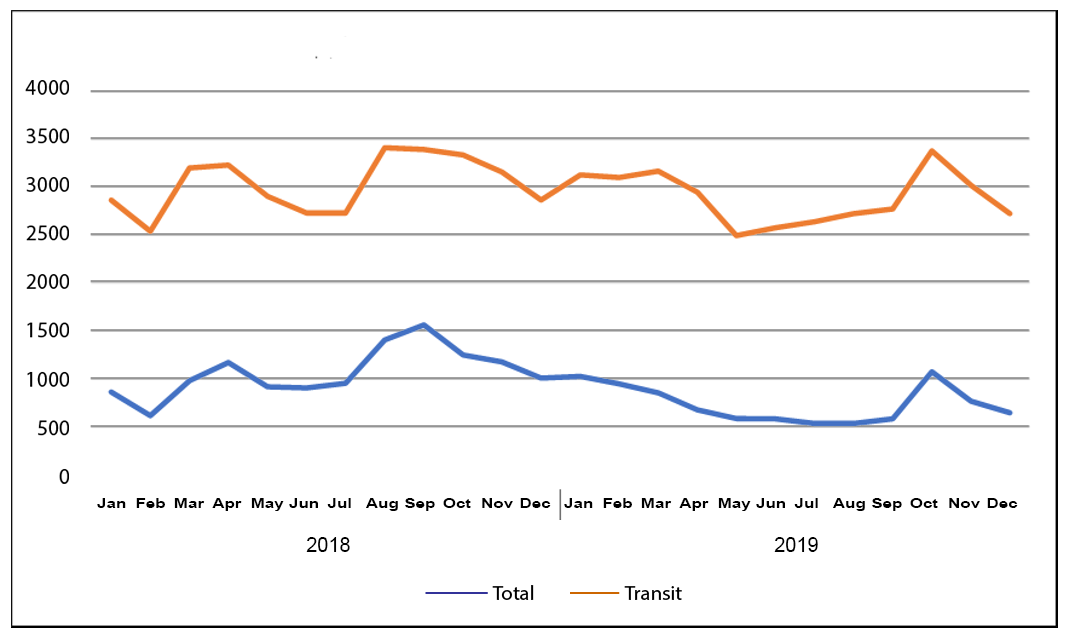 Border control by the Airport Police (LPA) at airports

Passengers coming from a country outside the Schengen zone are subject to border control. If a problem occurs at the border checkpoint or at the "box" (entry requirements are not met, the passenger is the subject of an alert, an additional document check is required, etc.), the passenger is then directed to the second line for further control. In this way, the flow of passengers at the checkpoint is not interrupted or delayed.

If a passenger does not meet the entry requirements, then the Aliens Office must be contacted, which will make a decision. This can range from the issuance of a visa, a special passage permit... to a refusal. In the latter case, the passenger must return to the airport of origin.

A file is opened whenever a false, forged or fraudulently used document, or a document subject to an alert, is discovered, or in case of an impostor. Several documents can be seized per file (for example, a false passport, a false driver's license, a false identity card, etc.).

* Impostors use genuine and valid documents for fraudulent purposes (generally on the basis of their physical appearance).
** False documents are completely counterfeited.
*** Forged documents are genuine documents in which changes have been made. For example, a picture on an ID document, a date on a visa, a new identity page in an existing passport. 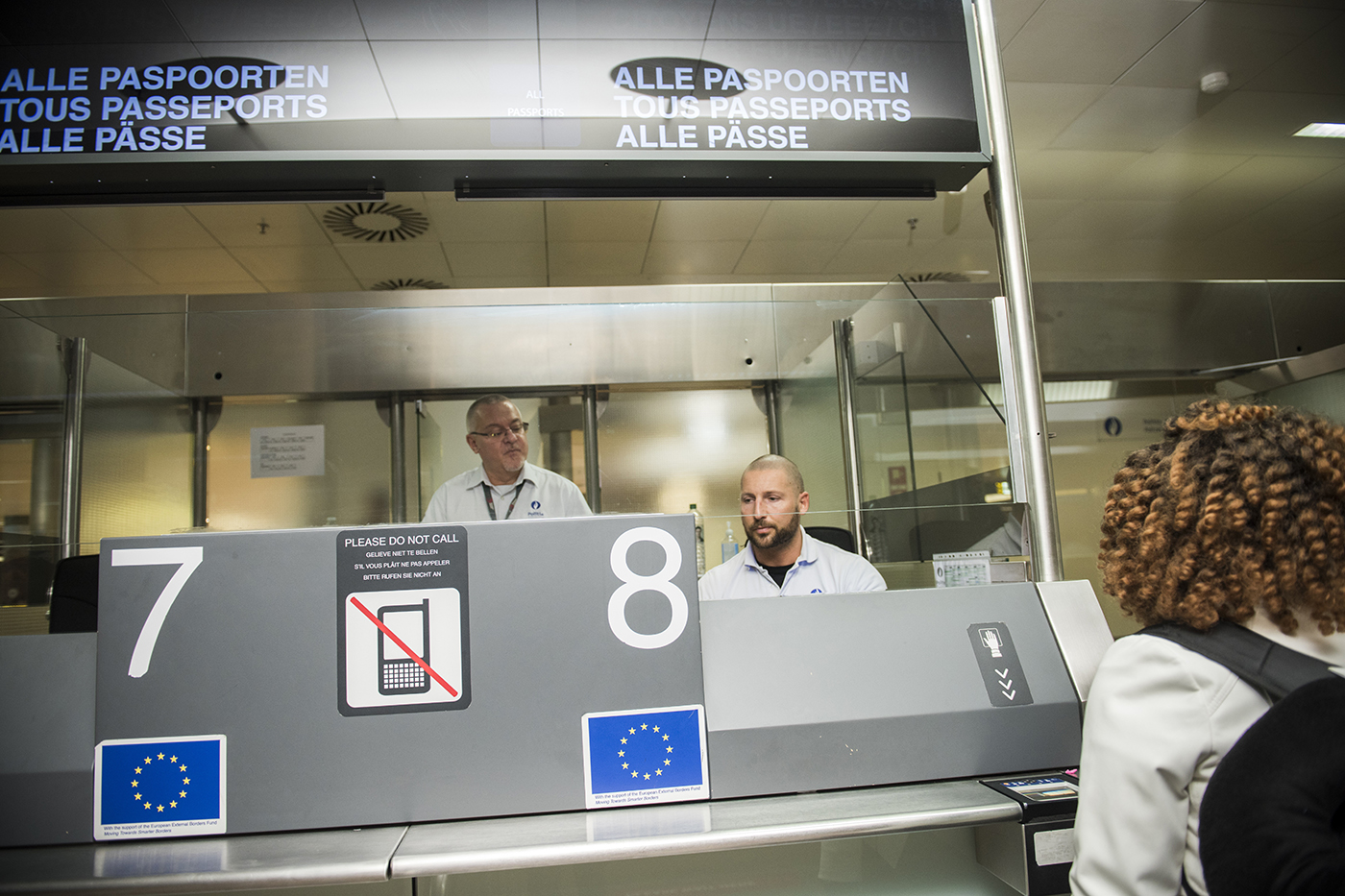 * Refoulement: whenever a person arrives at the border without valid papers, he/she may not cross the border and is returned to the country where he/she comes from.
** Repatriation: whenever a person is found in an illegal situation on the territory, he/she must be repatriated to his/her home country or the last country through which he/she transited. 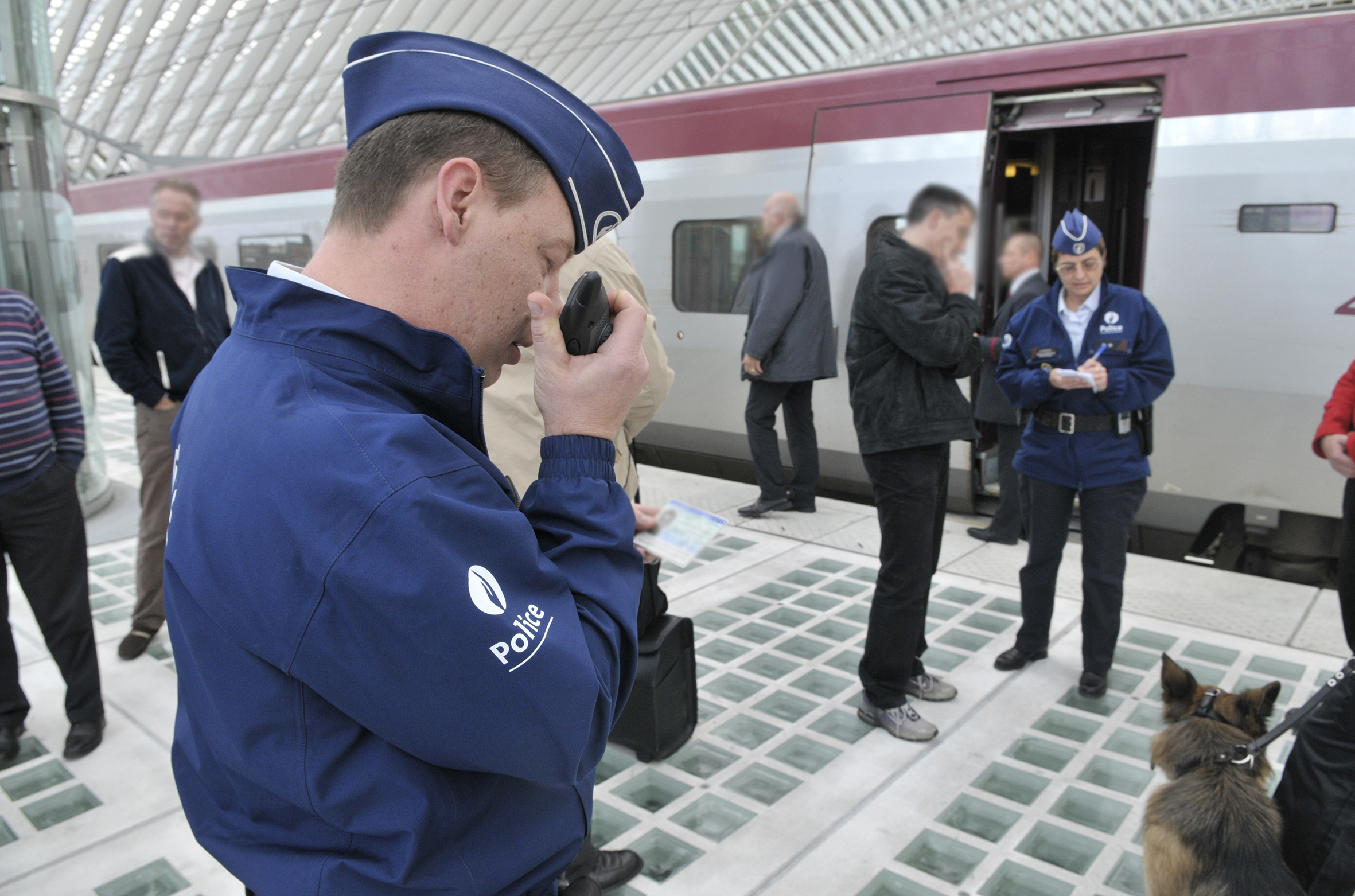 Border control by the Maritime and River Police (SPN) at seaports

* in regular operation and during targeted actions
** confirmed by the magistrate) in the context of illegal migration (human smuggling and transit migration).

National and international cooperation are paying off!

The Maritime and River Police (SPN) collaborate with various partners in the fight against transit migration. A good example of this cooperation is the call that the West Flanders Emergency Centre (CIC) received at the beginning of December via WhatsApp.

Two migrants in transit were hiding "somewhere" and were cold." Immediately after the call, the maritime traffic in Zeebrugge was completely suspended with the help of the port operator. All available teams were then mobilised to search for what looked like a needle in a haystack. Thanks to telephone data, SPN was able to pinpoint the exact location of the emergency call and target their search. Other colleagues analysed the WhatsApp messages and video surveillance images of the trucks. Once the pieces of the puzzle were put together, the two migrants were discovered in a vehicle transport after a five-hour search.

This action is a good example of integrated functioning, made possible thanks to motivated members of SPN, the UK Border Force, the West Flanders Information Crossroads, the Federal Judicial Police of West Flanders and the National Technical Support Unit of the Special Units of the Federal Police.

Frontex missions are control missions at the external borders of the European Union.

Contribution to Frontex missions (in particular to international joint operations) in number of hours worked:

In the fight against human smuggling and trafficking, Federal Judicial Police (PJF/FGP) investigators worked 191 364.04 hours, or 7 % of the federal investigation capacity.

In 2019, the Federal Judicial Police opened

MEDUSA: united efforts in the fight against human smuggling

In recent years, various entities of the Federal Police have joined forces in the MEDUSA project. The particularity of the latter is that it is based on collaboration between entities of the administrative pillar (DGA) and the judicial pillar (DGJ).

For example, in December, a week of action was conducted jointly by the Migration team of the Directorate of Administrative Police Operations (DGA/DAO) and the Trafficking/smuggling in Human Beings Team of the Directorate for Combating Serious and Organised Crime (DGJ/DJSOC). In total, no less than 1 016 staff members worked 5 118 hours in various judicial districts to combat trafficking in human beings. This initiative led to the interception of 125 transit migrants. Two smugglers were also caught in the act. 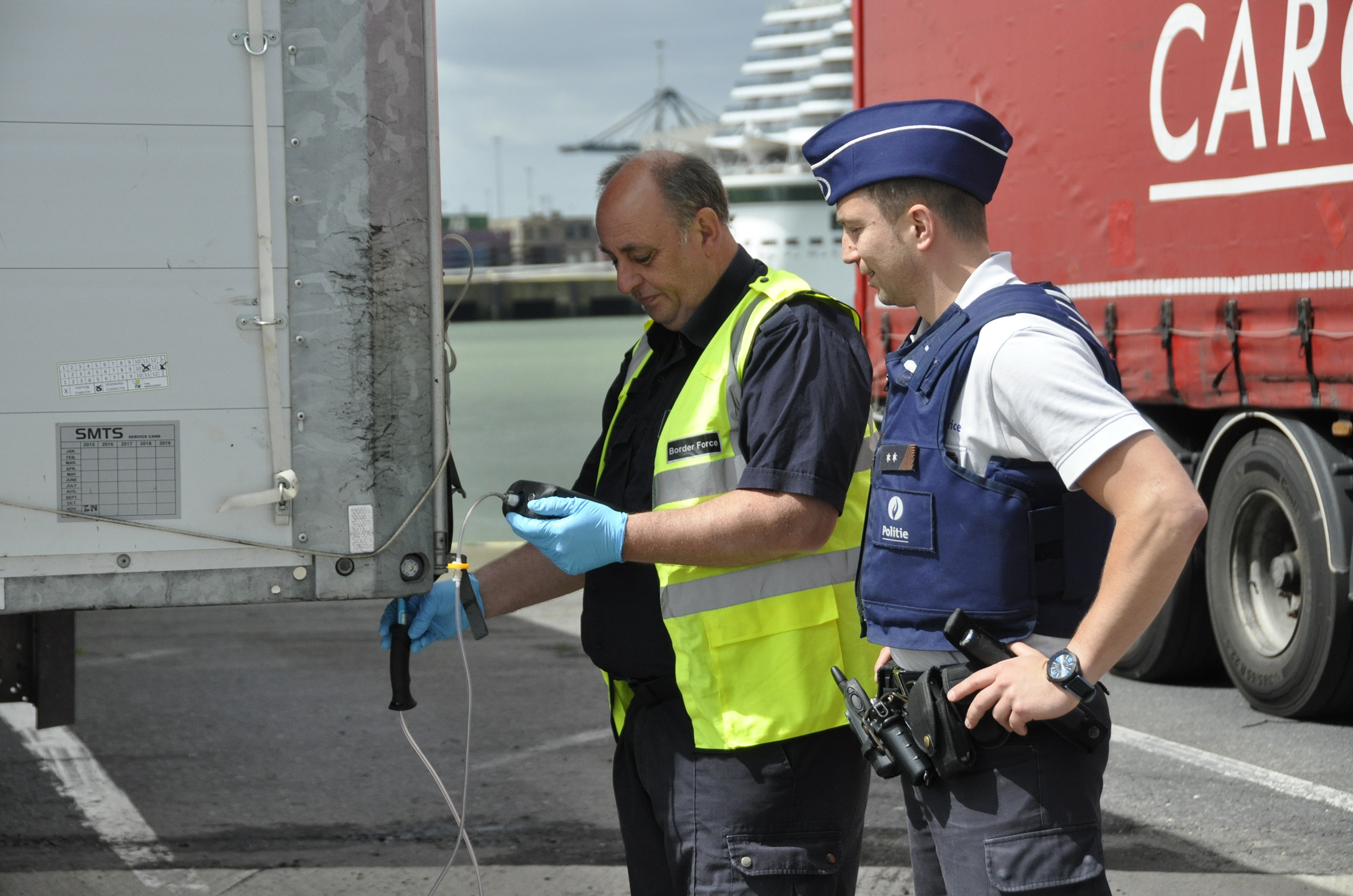 In the fight against drug trafficking, Federal Judicial Police investigators worked 428 756.32 hours, or 15,9 % of the investigation capacity. 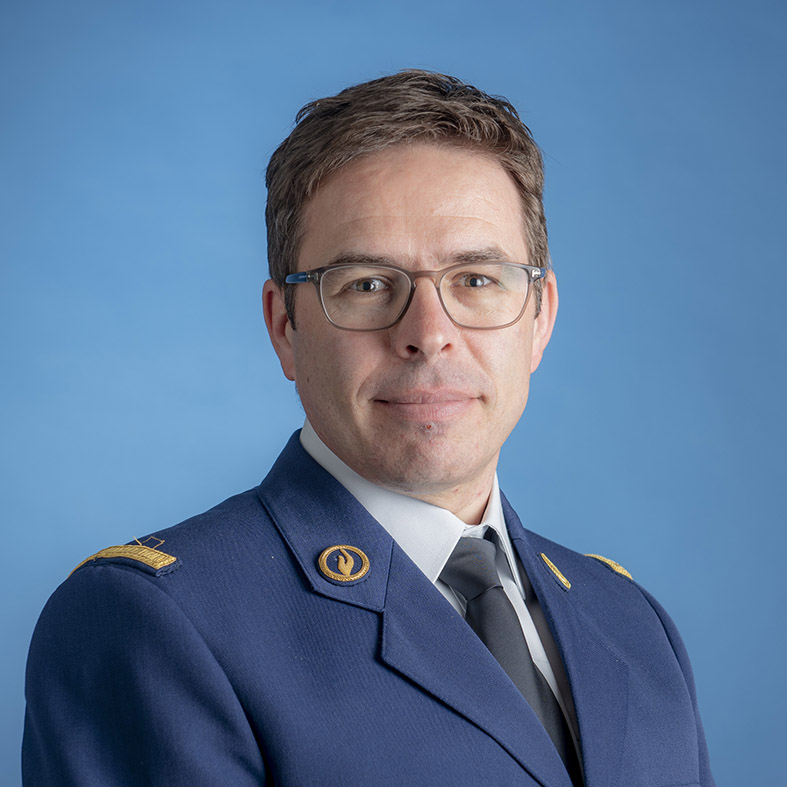 A challenge we will face

In recent years, terrorism has — rightly — received a great deal of attention. In this regard, we should commend the efforts made by all of us. Unfortunately, these additional efforts have not allowed us to progress in the fight against other phenomena. They have obviously benefited internationally organised criminal gangs, especially international cocaine traffickers, who are becoming so rich that society is being destabilised.

The sad world record for seizures achieved in one of our ports — 62 tons of cocaine — confirms this. In one port alone. In a single year.
Total value in pure state: more than 3 billion euros. This phenomenon calls for a proper approach. An approach that is well thought out, planned, attentive to all the related phenomena such as money laundering or, perhaps even worse, the spiral of violence — grenade attacks and gunfire — that a densely populated city had to face within its walls. In the same way that we have fought terrorism with some success, we are continuing our efforts to combat this phenomenon, together with our partners. The first results of our efforts give us cause for optimism. The challenge before us is not a trivial one: we are going to face it and take it up all together."

The Étoile actions are the result of a collaboration between the Federal Police, the Local Police and the General Customs and Excise Administration. The focus is on drug trafficking and especially drug tourism in the border regions.

In 2019, police services and customs checked 9 075 people and more than 7 200 vehicles during several action days spread over five periods. Twenty-eight coaches of low-cost companies and 78 trains were also checked.  Overall, the actions led to the arrest of 75 persons and the seizure of 63 vehicles and 51 weapons. 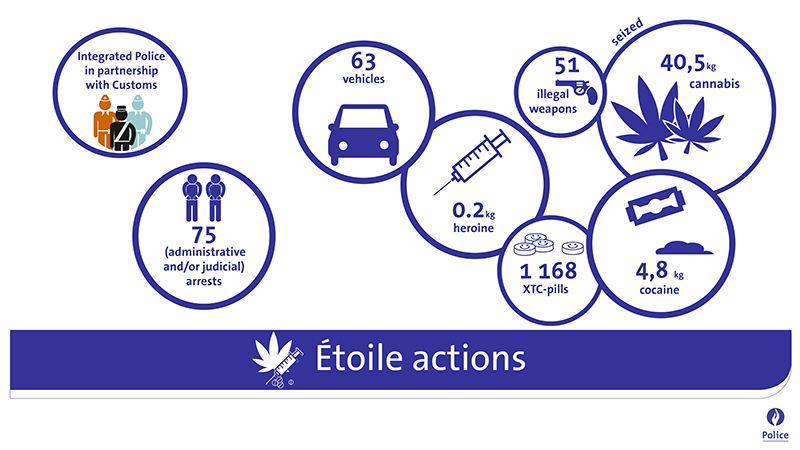 Drug seizure by the Airport Police

At the end of March, the Gosselies Airport Police (LPA) received information from the Italian police on the probable departure of two passengers to Gran Canaria, possibly carrying drugs. They might be in possession of drugs. Federal police officers managed to arrest them and discovered six packets of cocaine (for a total weight of 6 586 kg) and one packet containing 740 grams of heroin in the luggage of the first individual. The luggage of the second passenger did not contain any drugs, but during a scan at the hospital, 77 pellets were found in his belly.

Thanks to a good cooperation, both files were taken over by the Federal Judicial Police (FJP) of Charleroi in order to continue the investigation. 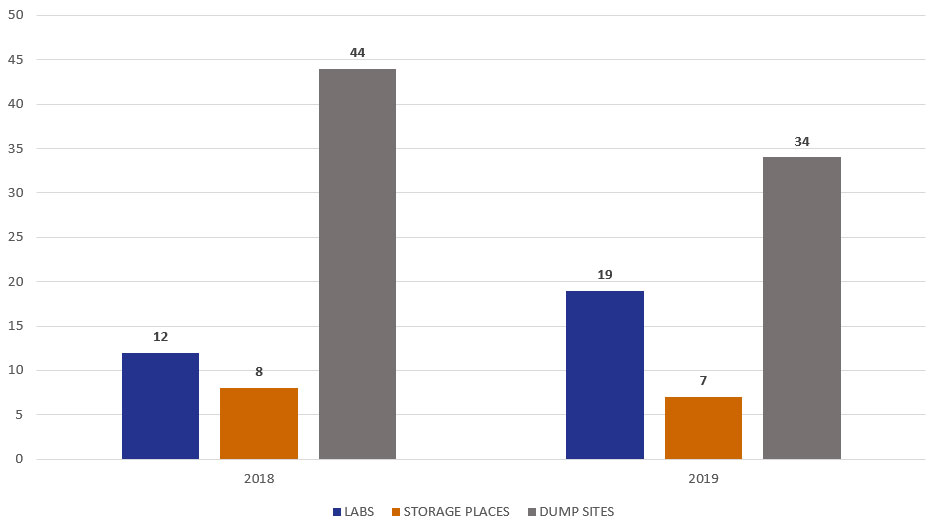 The police have dismantled a total of 1 000 cannabis plantations. The number of large-scale plantations (i.e. with a capacity of about 400 000 plants) discovered in 2019 decreased to 229, compared to 239 in 2018. Another finding is that plantations are being developed with increasing professionalism, using new materials and techniques.

A total of 46 seizures resulted in 840 kg of marijuana being seized. The Federal Police also seized 52 kg of hashish during eight actions.

Sea ports are links in the trafficking of cocaine from South America to Western Europe. The Federal Police is increasingly involved in the fight against cocaine trafficking by collaborating with police services in countries of origin and transit in South America (Colombia, Brazil, etc.).

In November, the Railway Police (SPC) organised a control action on several trains in collaboration with the Antwerp customs. The action targeted in particular the international trains on the Antwerp-Noorderkempen-Breda line, which is very popular with drug smugglers. Checks were systematically carried out by two mixed teams, one dealing with the front of the train and the other with the rear. The teams were supported by silent drug dogs.

In total, the teams arrested seven persons in possession of narcotics, mainly cannabis and amphetamines for personal use. One suspect was carrying a larger quantity of various drugs. This action is a good example of the smooth cooperation with the customs — especially its canine teams — which has also produced very good results.

In 2019, five new cases related to the problem of end-of-life vehicles/wrecks, to illegal garage activities, to storage and to various violations of environmental legislation were opened. In addition, six new cases were opened for illegal storage and processing of textiles. In the context of the fight against these forms of illegal economy, the Federal Police also provides support and expertise to Local Police forces.

The actions in this field always take place in a multidisciplinary context, in partnership with the National Social Security Office, the Federal Public Service Economy, the Federal Public Service Finance, the Openbare Vlaamse Afvalstoffenmaatschappij (OVAM), the environmental inspectorate or the employee in charge of the environment, the Urbanism Department, the labour auditor's office, etc. This joint approach of police and inspection services provides a great strike force and greater efficiency. 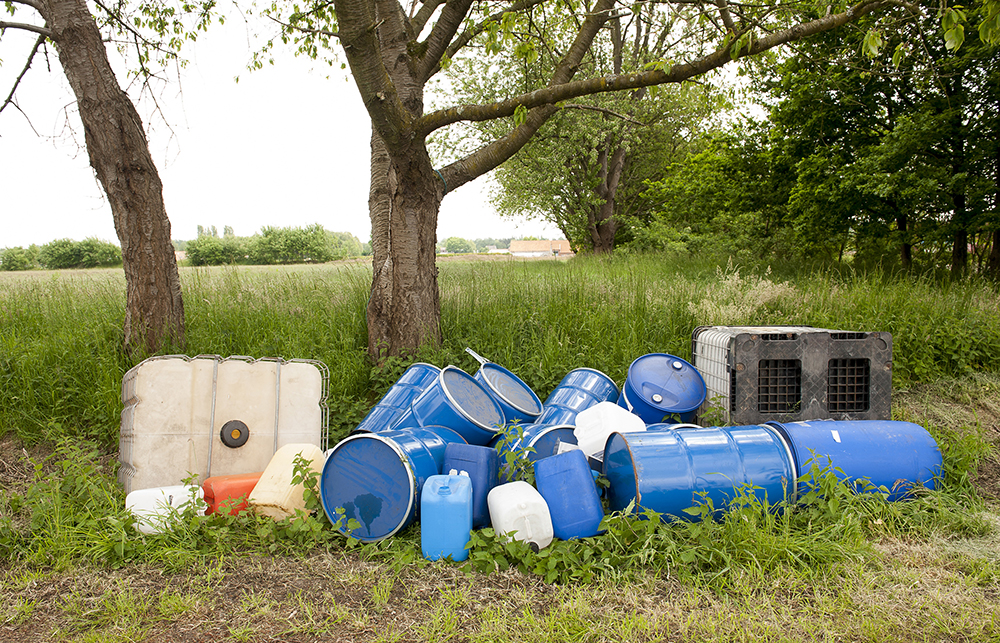